hp_prisonerfest is pleased to announce a brand new affiliate - 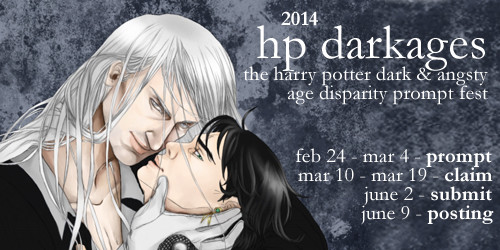 It's a brand new fest focusing on the dark and angsty side of pairings with an age disparity, and they've just opened claiming! All pairings have a 10 year age disparity and there are loads of lovely prompts to choose from, so you should hope on over there and check them out!

The fourth round of

hp_prisonerfest has come to end, and it's time to announce the wonderful authors and artists who created our lovely gifts. It's been another incredible year with an amazing quality of both fic and art produced, and we're exceptionally grateful for all your hard work. We've had a great time modding and we hope you enjoyed yourselves too!

imera
[Ron/Pansy, NC-17] The despicable things people will do for revenge... and power.

Wednesday 7th August: I'll Try to Keep You for

Thursday 8th August: Needs Must for

flyingharmony
[Lucius/Narcissa, PG-13] Lucius wants to make sure his family survive the war in tact, so he resorts to drastic measures to ensure that they do.

halfbloodmalfoy [FIC & ART]
[Lucius/Hermione, R] Hermione was trapped after a battle, and she will have to endure things that she never thought possible. Will she be able to?

Saturday 10th August: And the Bible Didn't Mention Us (Not Even Once) for

With all the gifts now out, posting has sadly come to an end. The Master List will be posted on Sunday 18th August, giving you exactly a week to catch up with anything you might have missed. To fest participants: please do not post your work anywhere until the Master List has been posted and please remain anonymous, as the fest has not ended yet! If you have not yet commented on your gift, please do so, as all our authors and artists worked especially hard.

See you on Sunday 18th August for the reveals! ♥

Title: And the Bible Didn't Mention Us (Not Even Once)
Author:

gamma_x_orionis
Pairing(s): Bellatrix/Narcissa, Lucius/Narcissa
Word Count: 3842
Rating: PG-13
Warnings: Angst, Illness, Character Death
Summary: It feels different to lose your mind.
Author's Notes: First of all, a massive thank you to the mods for hosting this wonderful fest and for being so incredibly patient with me! Much love also to F., J., K. and O. for all your help and constant support, as well as the amazing beta skills you provided me! To Gamma - I looked at all your prompts, fell in love with every single one, and in the end the fic went its very own way. Still, I really, really hope that you like this!
Disclaimer: Harry Potter and all related characters are the property of Joanne K. Rowling and Bloomsbury/Scholastic. No profit is being made from this work, and no copyright infringement is intended.

halfbloodmalfoy
Pairing(s): Lucius/Hermione, Hermione/Many (Only Implied)
Word Count: 1,014
Rating: R
Warnings: Non-con, AU, humiliation (squint), object insertions (squint), blood, violence, torture (squint), death (only if you squint)
Summary: Hermione was trapped after a battle, and she will have to endure things that she never thought possible. Will she be able to?
Author's Notes: First, I want to say 'Thank you' to the Mods, for being so patient with me after I changed my mind and they had to extend my time over and over again. To

halfbloodmalfoy I hope you like it; I took one of your prompts and went with it. I was going to do something else, but then this came to me and wouldn't let me alone, so what a better way to work that wonderful prompt than to do something so Hermione :). Also, to everyone, this story is not betad not because I didn't have time, but because I feel that if Hermione was trapped and in such a position, I think the last thing she would care about is her grammar and even if she tried her mind would be a little scatterbrained. So, please, even if the grammar is driving you crazy, give it a try. Quote by Helen Keller.
Disclaimer: I do not own Harry Potter and do not make money out of my writing nor art.

flyingharmony
Pairing(s): Lucius/Narcissa
Word Count: 1508
Rating: PG-13
Warnings: None
Summary: Lucius wants to make sure his family survive the war in tact, so he resorts to drastic measures to ensure that they do.
Disclaimer: The characters and canon situations in the following story belong solely to JK Rowling, Scholastic and WB. I am not making any money from the publishing or writing of this story.

leontinabowie
Pairing(s): Draco/Luna
Word Count: 1,266
Rating: R
Warnings: Graphic Fantasy Violence; Torture; Stockholm Syndrome; Non-Graphic Mention of Two Teenagers Having Sex; Imprisonment; Present Tense Narration.
Summary: "When it's done," Draco says. "When it's finished, I'll try to keep you. Tell them you're my pet or my toy, whatever they want to hear. I'll try to keep you."